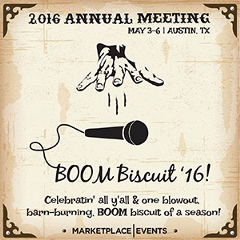 In May 2016, Marketplace Events held a company meeting in Austin, TX. ​In the Austin spirit of keepin' it weird the theme for the meeting this year was #BoomBiscuit. According to UrbanDictionary.com, the top definition of the slag term "Boom Biscuit" is: Success has been achieved. You have done what you said you would do. A term of endearment towards a successful outcome.

Our time in Austin was spent celebrating a successful show season and catching up with each other. Company meetings allow everyone from across the U.S. and Canada time to share ideas and best practices. It is a time of open exchange and future planning. Teams focused in meetings covering everything from marketing events to logistics.

Of course, ​the company meeting is also time to celebrate our award winners! Throughout our three days in Austin, Tom Baugh, Mark White, and Lisa Kropf announced our 2016 Marketplace Events Award Winners:

Congratulations to all our award winners!
Celebratin' all y'all & one blowout, barn-burning BOOM Biscuit of a season!

This is an excellent show. There were lines of people at my checkout counter each day. We love to do this show. This was our best show ever - and we participate in approximately 15 shows a year.
Vicki Stobbe, Main Street Company
MAIN STREET COMPANY